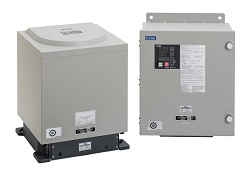 Locating directions on the high seas is fundamental to navigation. Our ancestors relied on the stars, but today we measure the direction aboard ship in the following ways.

Of these, the primary instrument for locating directions is the gyrocompass. Each method has its own strengths and weaknesses, but the gyrocompass can be widely used in all types of vessels, from small boats to large ships.
The main features of the gyrocompass are:

TOKYO KEIKI Gyrocompasses
Since acquiring manufacturing rights for the gyrocompass from Sperry Company in 1918, we have been pioneers in supplying every type of gyrocompasses for almost 80 years. We have become world leader in the market and owe this to our dedication in achieving the highest standards of 'precision', 'reliability', 'price', and 'service' in our products - fundamentals which still guide us.

TG Series: TG-8000
These gyrocompasses employ a technique where the gyrosphere is suspended in liquid oil by suspension wires (TOKYO KEIKI method). They are mainly used in large ships.

ES Series: ES-110
The TOKYO KEIKI method is typified in this series which has been a worldwide best seller and is a mainstay in small and medium size vessels.

GM Series: GM20
This series is a compact version of the ES Series, and is chiefly used in small vessels.

Principle
The gyrocompass applies the mutual effects of gravity, the earth's rotation, and the characteristics of the "gyroscope". The gyroscope is a device that rotates at a fixed point on the periphery of a substance that has mass and occupies space. The image of a flywheel rotating at high speed is often used to explain this principle.
1.Directional maintenance: The gyro continuously rotates maintaining a fixed direction.
2.Precessional nature: Unlike normal objects, when force is applied to the rotational axis of a gyroscope, a revolving axis is created at right angles to the force. This revolving motion is called precession.

Precession
The directional maintenance exhibited by the gyroscope is in relation to the space of the universe, and to use it as a compass on earth it must have a "north indication effect". In other words, to make the gyro perpetually indicate north from anywhere on earth, one need only rotate the gyro in the same direction as the earth's rotation at a rate equal to the earth's rate of rotation (angular velocity) at that point. If you would like more technical information on how we apply the north indication effect (i.e. the"TOKYO KEIKI method") to our gyrocompasses, please contact us at TOKYO KEIKI.